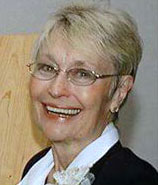 Peggy Dyson
If you were a fisherman in Alaska between 1965 and 2000, you would have set the schedule of your days by the voice of Peggy Dyson, who broadcast the marine weather from her house in Kodiak, twice a day over single sideband radio, at 8 a.m. and 6 p.m.

Peggy On the Air

Her voice was instantly recognizable, her clear measured cadence easily understood through static. Punctual to the minute, twice a day, seven days a week, holidays included, her broadcasts gave order to a working life at sea that was, by its nature, often extravagantly unbound to the clock. Her female voice lent a domestic humanity to the relentless logistical radio traffic dominated by men.

Peggy began the same way every time- “Hello all mariners, this is WBH29 Kodiak,” followed by the day of the week, the date, and the time of day. She followed with forecasts for more than a dozen meteorological areas along Alaska’s coast, from Southeast Alaska to Attu Island, ending at St. Mathew Island in the northern Bering Sea. It usually took a good twenty minutes to get through it all.

She started broadcasting in 1965, as the booming king crab fishery expanded west from Cook Inlet and Kodiak, and her husband Oscar started fishing in the Bering Sea. They kept in touch on single sideband radio he set up in their house off Mission Road. 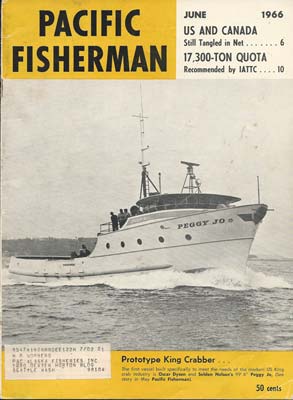 In those days, getting the marine weather forecast was difficult unless you were in range of a commercial AM radio broadcast, so Oscar often asked Peggy to call the National Weather Service in Woman’s Bay to get the forecast for whatever part of Alaska he was fishing in, and relay it to him. After awhile, the whole fleet was tuning in, and soon other fishermen began asking her to read the forecast for their locations as well.

By 1966, it was a daily, though unofficial and unpaid, routine. She got up at four a.m., called the weather service for the forecast, and broadcast it at eight. She got the next forecast at four p.m., and broadcast it at six. Before each broadcast she took on scene weather observations from dozens of vessels, relayed messages, and monitored emergencies at sea. She turned the radio down for a few hours after midnight, but she never turned it off.

Peggy sometimes announced things besides the weather- Super Bowl scores, World Series champions, or the winners of presidential elections. In January 1991 she told the fleet that the U.S. had begun bombing Iraqi Army units in the opening stages of the First Gulf War.

She called fishermen about more personal things too- babies born, family emergencies, deaths. Once she gave the news of a new baby to a fisherman father in Southeast while the baby’s grandfather listened in from his own boat in Cook Inlet. A few times she paid a fisherman’s electric bill after he forgot to drop the check at KEA before he left town.

Peggy had grown up in the Lower 48 before World War II, but had always wanted to visit Alaska. When she graduated from high school in Colorado in 1947, with a scholarship to the University of Colorado, she skipped the scholarship, rode a bus to Seattle, and flew to Anchorage. She got a job with the Corps of Engineers at Elmendorf Field and met her first husband there.

In the early ‘50s, before the roads came in, they homesteaded a few miles north of Homer. In the summers they usually worked a set of gold claims on the Susitna River, but one season she and a girlfriend fished a salmon setnet site on Kalgin Island. One day a young fisherman named Oscar Dyson came ashore to say hello, and in the small community of post-war Kenai Peninsula, they kept running into each other. After Peggy and her first husband divorced in the mid-1950s, she married Oscar in1963 and they moved to Kodiak. In 1966 Oscar built the Peggy Jo, the first steel boat designed explicitly to fish king crab, and went on to become a seminal figure in the framing of Alaskan fisheries policy after the U.S. extended its jurisdiction out to 200 miles in the 1970s. He died in a car accident in Kodiak in 1995.

At a seminar in Kodiak in 1975, the National Weather Service asked people how they thought the weather forecast could be improved. Oly Harder, a longtime Kodiak fishermen, raised his hand and said, “Let Peggy keep reading it.”

The NWS took his advice, put a teletype machine in Peggy’s office so she wouldn’t have to call the weather service, and year later began paying her to do the broadcasts. She did that for another 25 years. 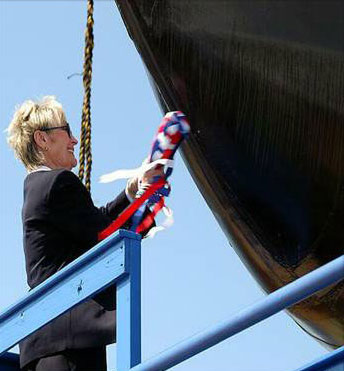 In the 2000s, after Peggy set her microphone down, the National Weather Service began broadcasting recorded loops of weathermen reading the forecast. These human voices have since been replaced with computer generated voice recordings. The forecasts now have an eerie sound, the cadence awkward, the pronunciation of Alaska’s place names often not quite right. The stations do not take calls, or give Super Bowl scores, or relay birth announcements.

Sometimes skippers stopped by Peggy’s house before they left town to show her on the chart where they intended to fish, so that if something went wrong, searchers would know where to look. Once, after a boat sent a mayday but sank before they could say the boat’s name, Peggy knew the fisherman’s voice, and let the Coast Guard know who they were looking for. And sometimes, when the Coast Guard called her about an overdue boat, she could tell them they were fine, just holed up in some bay, waiting for the weather to improve.

Peggy still lives in Kodiak part of the year.

KMM has built a small exhibit about Peggy Dyson in the Kodiak Key Bank, on the Mall across from the downtown boat harbor. Photos of Peggy at work, along with her radio can be viewed by visitors.